Cows Doing Yoga Before You Eat Them 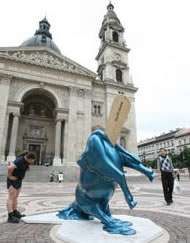 I love Cow Parades in their “normal” state, but these creations featured in the gallery are so much better. You have to go to major lengths to have your creation banned from a Cow Parade, but that’s what happened to the first one in New York. Some of them really go the extra mile, like the mermaid cow, lady bug cow climbing up a wall, and the melting lolly.