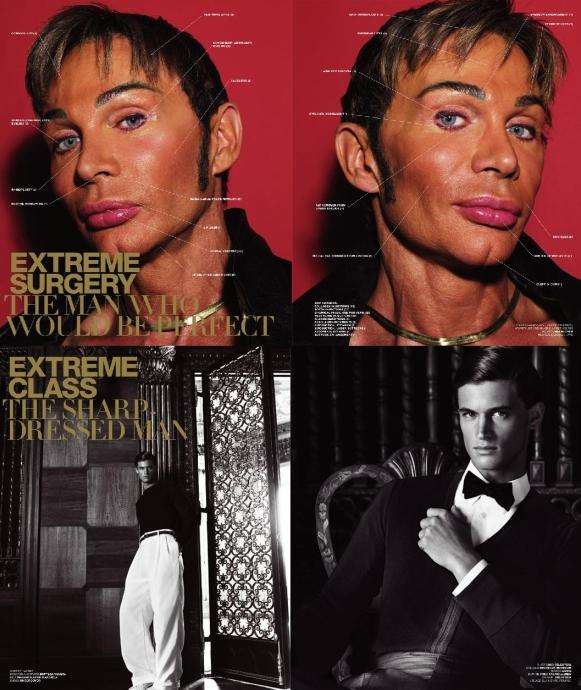 Ayman — December 8, 2008 — Fashion
References: vman & fashiontography.blogspot
Share on Facebook Share on Twitter Share on LinkedIn Share on Pinterest
Famed photographer Mario Testino has collaborated with VMAN magazine on a visual dissection and study of the furthest edges and extremes of modern manhood. According to VMan, “In a world where anything goes, there are as many versions of masculinity as there are men.”

With plastic surgery, sex changes and ‘pregnant men,' Testino argues that “masculinity has come to be determined less by a man’s exterior than by his kindness, his fairness, his taste, his behavior. Now you can look like one thing and be completely the opposite.”

It was his fascination with this idea that lead Testino to study the extremes of masculine identity today. He thought of all those extremes he has encountered in his life and found representations of them.

His visual celebration of those extremes includes the obsessively tattooed man, the beach bum dude, the tomboy girl who wants to look like a man, the androgynous man who want to look like a girl, the man with the long hair and beard, the extremely elegant man and much more.

The editorial (if we can call it that, as it is more of a visual social study) was styled by Beat Bolliger and appears in the new Winter 2008 issue of VMAN magazine (VMAN 12.)