Prada, Miu Miu and Cavali Flirting With Orange For Spring
Next
Set of
Related
Ideas 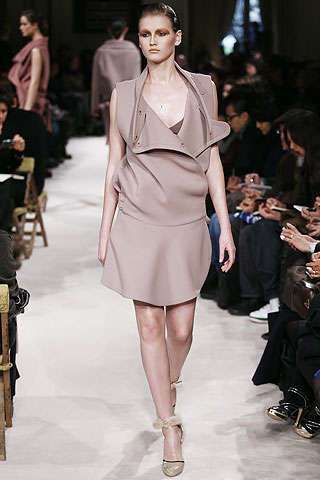 Jacqueline Parrish — July 6, 2009 — Art & Design
References: miumiu & style
Share on Facebook Share on Twitter Share on LinkedIn Share on Pinterest
Upon first glance, the Fall ’09 collection from fashion powerhouse Prada appears to be nothing more than a barrage of muted, well-tailored coats with the odd organza skirt and blouse thrown in for good measure. The Prada F/W ‘09 RTW collection is rife with oddly shaped and shapeless garments; certainly well tailored, but sloppy in appearance nevertheless.

Indeed, one such ‘dress’ from the Prada F/W ‘09 RTW resembles nothing more than an overwrought, impeccably tailored potato sack complete with a boat-neck and saddle bag side-pockets. As it gives the model a markedly podgy appearance, it boggles the mind to think of what such an outfit would do to the average woman; it harkens the name ‘Shamu.’

Further observation revealed Miuccia Prada’s fun usage of fur for Fall 2009. While I do not condone the use of animals in fashion, I did happen to enjoy the detail. Did that is, until it became so frequent and grandiose that I became positively convinced a rather large chinchilla had dubiously latched itself to the garment and was clawing its way up the models body, holding on for dear life.

Check out the gallery above to see these looks from the Prada F/W ‘09 RTW runway and more.
2.8
Score
Popularity
Activity
Freshness
Jeremy Gutsche Keynote Speaker