Top 65 Life Stages Trends in May

Top 40 Furniture Ideas in May 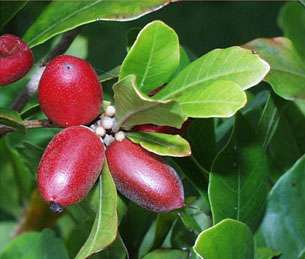 Bianca — April 12, 2007 — Lifestyle
References: online.wsj
Wouldn't it be so much easier if healthier foods tasted like candy? That you could load up on sweet treats and eat as much sugary goodness as you want without worrying about an expanding waist line or diabetes?

Imagine a saccharine stick of rhubarb or lemon as sweet as cotton candy. You can transform any sour or bitter food into something sweet; all you have to do is chew the red, coffee-bean size berries before your meal.

The berries themselves don't have a great flavour; it's the miraculin molecules inside that are responsible for the sweetening. The molecules bind to your taste buds and, for the next 30-120 minutes, make everything that touches your tongue taste sweet.

Those who have had it say the natural bitterness of beer is sweetened, making it taste smoother and creamier. One taster liked it to the taste of a chocolate milkshake. A good goat cheese also comes highly recommended; a Wall Street Journal article quoted one person saying the cheese tasted like it were covered in powdered sugar.

The Miracle Fruit is beginning to gain popularity by culinary experts around the world. The Japanese have begun freeze-drying and canning the berries. Tokyo's Mandarin Oriental hotel and the Four Seasons Resort in Palm Beach feature them as a dessert.

It could be a major breakthrough for diabetics to use in place of chemical sweeteners like aspartame. Some cancer patients have found the berries get rid of the metal taste left in their mouths after chemotherapy

To date it is legal to grow and sell the berries in the U.S., but they aren't FDA approved as additives. In the 1970s, Americans Robert Harvey was able to turn the berries into powder and tablet form. His company, Miralin, made everything from gum to popsicles to straws coated in miraculin. Later that year, the FDA deemed miraculin a food additive that would require years of testing before it could be considered safe and Miralin filed for bankruptcy.

Surely it is only a matter of time before the berries are approved. They are quickly gaining international popularity, and with the recent article about the fruit in The Wall Street Journal, people will begin demanding samples of the little miracle that could change our diets forever.

*Unfortunatley the video is in Japanese, but it still shows the fruit and its effects.