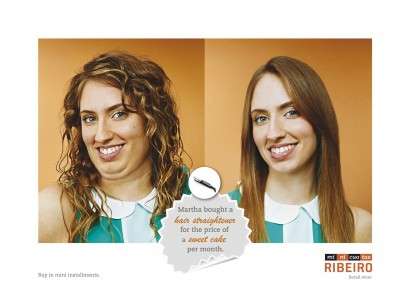 Meghan Young — January 15, 2013 — Marketing
References: ibelieveinadv
Share on Facebook Share on Twitter Share on LinkedIn Share on Pinterest
The Minicuotas Ribeiro campaign hilariously connects shopping at the retail store to looking better. A discount store in Argentina, it encourages people to swap one regularly purchased item for another than will do them a lot better. For instance, if Martha traded her sweet cakes for a hair straightener, she'll not only lose weight, she'll have better hair. As for John, instead of hair gel, he should invest in a fan to cool him down and improve his hair also.

Created by Almacén, an ad agency based in Buenos Aires, Argentina, the Minicuotas Ribeiro campaign was art directed by Marta Abad with creative direction by Walter Onorato and Diego Duprat. It was photographed by Juan Salvarredy.
3.8
Score
Popularity
Activity
Freshness
Get Trend Hunter Dashboard