Toys For Pigs
Next
Set of
Related
Ideas 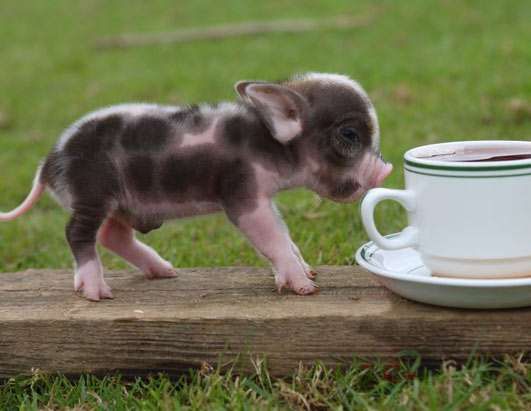 Only a few breeders around the world have perfected the science of breeding such tiny pigs. One American breeder offers two sizes of mini pigs: Royal Dandies™, which average 29 to 39 lbs.; and the even tinier Dandie Extremes™, which average only 19 to 29 lbs. Breeder Patty Sorensen claims these pigs are not only small and adorable, but intelligent, social and affectionate.

Slightly larger, but still in the miniature category, are the pigs of Pennywell Farm in South Devon, England. At birth, these pigs average 8 oz., and they grow to about one-fifth the size of a standard piglet (about the size of a Springer Spaniel). Photographer Richard Austin has captured many images of the piglets (see gallery), including one tiny fellow named Tetley standing next to a tea cup to illustrate his size. Austin also filmed the accompanying video of the Pennywell Farm piglets.

Pennywell Farm says it has received thousands of purchase inquiries from around the world, and currently has an extensive waiting list.