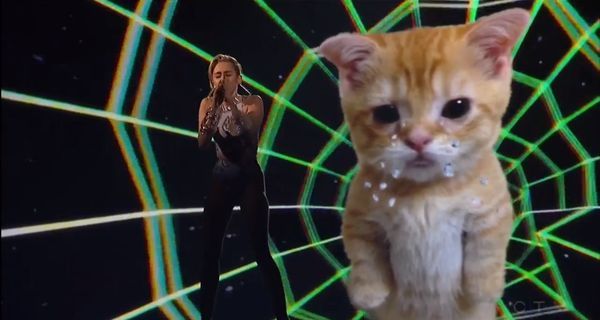 Vasiliki Marapas — November 25, 2013 — Pop Culture
References: youtu.be & buzzfeed
Share on Facebook Share on Twitter Share on LinkedIn Share on Pinterest
The Miley Cyrus 2013 AMA performance took her love of cats to the next level; not only was the star's skimpy two-piece outfit adorned with cats, the singer also performed in front of a screen featuring a giant, virtual kitty.

The CGI feline was the focal point of the entire performance, even lip-syncing the lyrics along with Cyrus. And when the song—the heart-wrenching ballad ‘Wrecking Ball’—reached the pinnacle of emotion, the kitten burst into tears. As if that wasn’t enough cute overload, the floating tabby ended the song with Cyrus’s notorious wink and tongue wag.

This performance is one of many on a long, illustrious list of Cyrus’s attention-grabbing appearances—perhaps it won’t be her most recognized, but it’s definitely her most adorable.