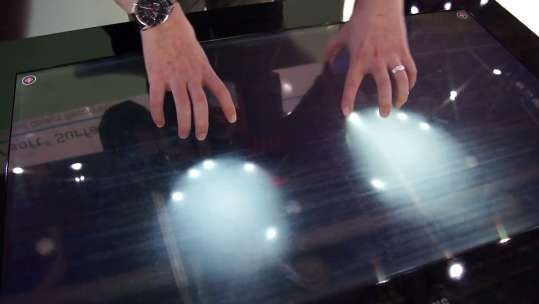 Katherine Vong — January 14, 2012 — Art & Design
References: theverge & psfk
A new and improved Microsoft Surface SUR40 table has been showcased at CES 2012, and this updated version doesn’t even require your touch to operate. The design was originally an interactive touchscreen table, but now it operates more like a sense-screen table.

Microsoft has employed a special screen by Samsung that features an additional pixel (four instead of the standard three RGB pixels) that is actually a camera. The camera makes the screen on the Microsoft Surface SUR40 a giant lens, says PSFK. It can sense your fingers because it can seem them, so you don’t have to touch the screen to interact with the table. In fact, it can sense more than one users’ hands and even the direction your fingers are pointing.