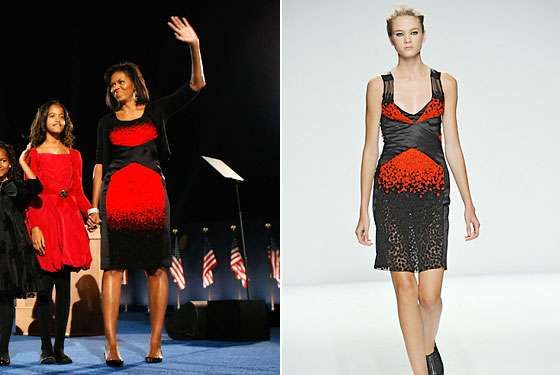 Ayman — November 5, 2008 — Social Good
References: nowpublic & nymag
Share on Facebook Share on Twitter Share on LinkedIn Share on Pinterest
The always fashionable new First Lady, Michelle Obama, shined in a striking black and red dress at the Barack Obama victory speech on Nov. 4. That dress has now been identified as a Spring 2009 Narciso Rodriguez design that debuted on the runways of New York Fashion Week a few weeks ago.

The choice of the acclaimed designer and the exclusive, not currently available in stores, dress has excited the fashionistas who follow Obama’s style choices. See, up till now, Michelle has been mostly wearing frugal pieces from the likes of J.Crew and H & M. Even her designer pieces were ones that were already available for sale in stores.

The choice of the Spring 2009 Narciso Rodriguez dress shows that Michelle Obama rose to the occasion of the special victory night. It also means that she can mix both frugal-casual style with designer pieces, which is much more exciting.
5.7
Score
Popularity
Activity
Freshness
Access Advisory Services