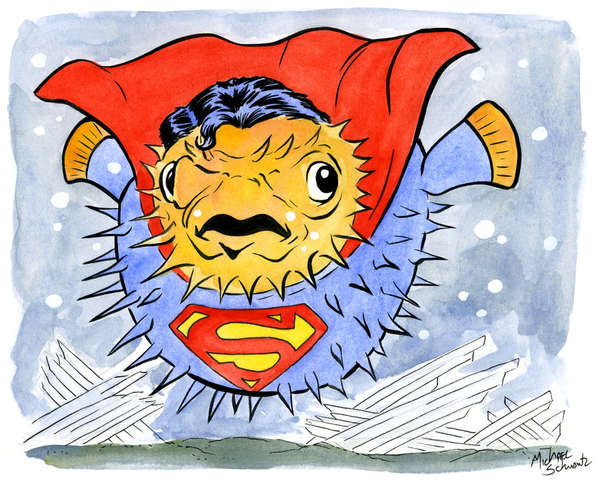 Jason Soy — September 1, 2012 — Pop Culture
References: mikejschwartz.deviantart & bluedogeyes.tumblr
Share on Facebook Share on Twitter Share on LinkedIn Share on Pinterest
Superheroes have been re-imagined in myriad ways, resulting in some goofy characterizations, but I think these Michael Schwartz illustrations take the cake when it comes to making comic book characters even more bizarre than they already are. Rather than envisioning the likes of Batman, Superman, Flash and more as humanoid beings, Schwartz has rendered them as aquatic creatures. Seeing sharks, blowfish, dolphins and other underwater species dressed in ridiculous superhero garbs truly is worthy of a laugh.

Equally as impressive as Michael Schwartz’s redesigns is the fact that he’s rendered over thirty illustrations in the series and does not seem to be slowing down. And when he isn't drawing beloved superhero as fish, he's rendering some of the most impressive comics-related pictures I have ever seen.