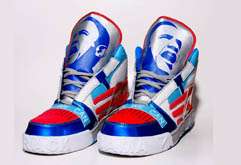 MiBlox Barack Sneakers Are the New Air Force Ones

Nadir Biggs — February 5, 2009 — Fashion
References: miblox & ozonemag
Share on Facebook Share on Twitter Share on LinkedIn Share on Pinterest
These limited-edition MiBlox Barack sneakers demonstrate your pride and patriotism in President Barack Obama and his message of change. The sneakers are in red, white and blue, with 'Change' printed on the bottom of each sole. The sides mimic the red-and-white waves of Obama's campaign logo.

Check out some more Barack Obama sneakers below.

"Now, these we can't be too too mad at. Especially after reading about the company, MiBlox, who made these joints. Plus they have a bible scripture on the sole. Hating on these too hard will almost be like booing a 6-year old singing â€œGreatest Love of Allâ€ at a talent show. Unless their name is Randy Watson, Jr. But we must say, these are very original. Far more unique than the random Air Forces and Shell Toes we see with Obama logos painted on and etched it.

What do ya'll think, would you rock these? Or are these instant jone material? At $75 a pop, they'll be souvenirs at the least."

Implications - Barack Obama serves as an example of how the common perception of fame has altered.
3.8
Score
Popularity
Activity
Freshness
Attend Future Festival