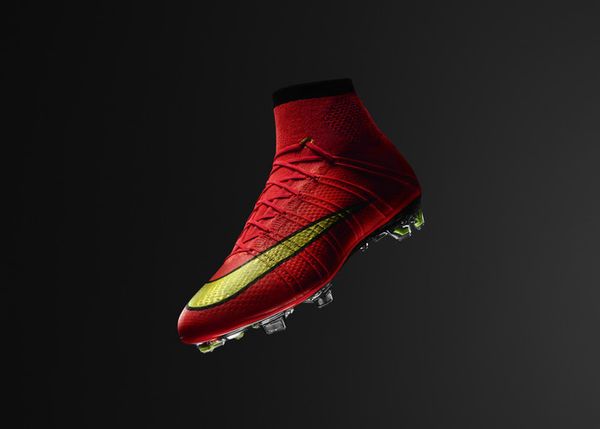 Nike Revolutionizes the Mercurial Vapor with the Dynamic Fit Collar

Akihiko Tse — April 28, 2014 — Fashion
References: nike & nikeinc
Share on Facebook Share on Twitter Share on LinkedIn Share on Pinterest
In what has become the soccer boot of choice for some of the most fastest, skillful and gifted players to wear on the world stage, Nike has launched the Mercurial Superfly in anticipation of the upcoming 2014 World Cup in Brazil.

The boot, unveiled at the Nike Innovation Summit held in Madrid, Spain, follows hot on the heels of Nike’s Magista model, where the introduction of the Dynamic Fit Collar—an extension of the boot above the ankle bone that delivers a heightened sensation of the boot with a sock-like fit—revolutionizes the paradigm for how soccer boots are designed.

The Mercurial Superfly was released in two colorways -– red and black -– and centers around the iconic Mercurial design first released back in 1998. The newest design incorporates Flyknit technology, a three-knit weave that minimizes the material space between the foot and the ball to dramatically enhance a player’s touch. Brio cables are knitted directly into the upper and conjoined to the outsole and the heel, giving the boot added support. Finally, a modified stud configuration on the carbon plate on the heel offers more stability, and added studs at the toe provide more grip and propulsion power during the critical final 10 per cent of a player’s stride. These three components cap what Phil McCartney, Nike’s Vice President of Sport Performance Footwearm, emphasizes players have told them they looking for in a boot—“fit, touch and traction.”

Officially unveiled by current Ballon d’Or and FIFA World Player of the Year Cristiano Ronaldo, the Mercurial Superfly was the culmination of a star-studded, two-day event showcasing the new kits, boots and off-pitch apparel being donned at the showpiece event of world soccer.