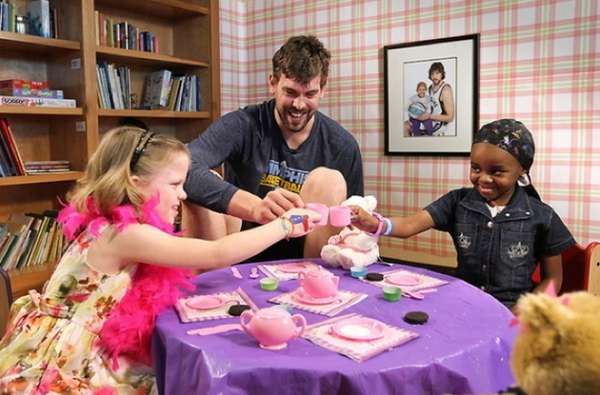 Jordy E — March 23, 2012 — Lifestyle
References: nba & buzzfeed
Share on Facebook Share on Twitter Share on LinkedIn Share on Pinterest
Members of the Memphis Grizzly NBA basketball team have shown their support for the St. Jude Children’s Research Hospital in Memphis, Tennessee through the Hoops for St. Jude project. The larger-than-life all stars Marc Gasol and Rudy Gay took time out of their busy schedules to partake in an adorable tea party, a move that benefited the community and most importantly, the morale of the ill children.

The Memphis Grizzly teammates got into the full spirit of the party. Dressed in aprons and chef hats, nothing proved to be too silly or childish for Gasol and Gay. As the group decorated cookies altogether, the photographers in the room -- including Joe Murphy, whose photos of the event seem to be the most popular on the blogosphere right now -- managed to capture just how ginormous the stars looked next to the infants.

The charitable Memphis Grizzly tea party is indicative of the camaraderie that exists between the sports community and humanitarian relief efforts. The valuable example set by Gasol and Gay will likely bring about more philanthropic activity on behalf of their team and Hoops for St. Jude.