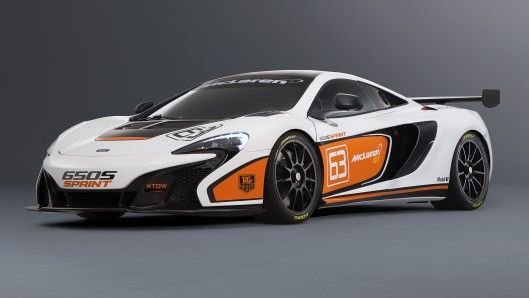 Rahul Kalvapalle — August 12, 2014 — Autos
References: media.mclarenautomotive & gizmag
Share on Facebook Share on Twitter Share on LinkedIn Share on Pinterest
The McLaren 650S Sprint is a specially designed boutique racecar that is set to make its debut at the Pebble Beach Road Races. The car, which bears an orange and black livery, will be one of three special McLaren cars at the event.

The car is equipped with a 3.8 twin-turbo V8 engine that puts out 641 horsepower, just like the regular McLaren 650S. However, its engine and gearbox have been recalibrated to make the vehicle especially suitable to the race track. The car also sits lower thanks to suspension modifications, reworked dampers and tuned springs.

The McLaren 650S Spring is also designed to be more aerodynamic. It has been tweaked to increase its downforce, while its engine cooling efficiency has been heightened thanks to a larger radiator.