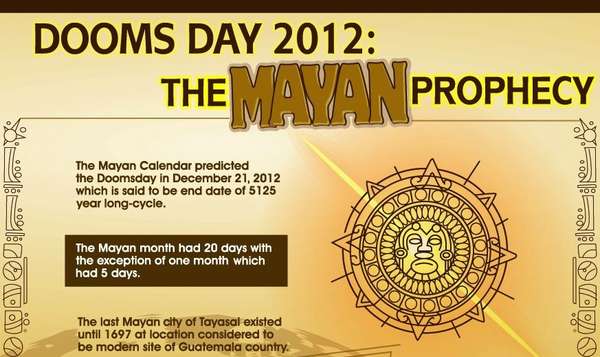 Michael Hemsworth — December 7, 2012 — World
References: infographicsonly
Share on Facebook Share on Twitter Share on LinkedIn Share on Pinterest
According to findings, 2012 is the year the Mayan calendar ends and people around the world are taking the rumors to heart by preparing themselves for the worst. The Mayan calendar has a completion date of December 21st in 2012, which will be the end of an over 5,000-year cycle. The ancient civilization existed up until 1697 in what is now known today as Guatemala.

Some of the widely believed theories about the end of human civilization include an asteroid hitting the earth, a change to the solar cycle that causes lethal solar flares, an alien invasion and, last but not least, a zombie apocalypse.

Countries around the world are preparing for whatever happens in the future including Russia that is currently constructing 5,000 bomb shelters and Holland that is securely storing seed for crops.
2.4
Score
Popularity
Activity
Freshness
View Innovation Webinars