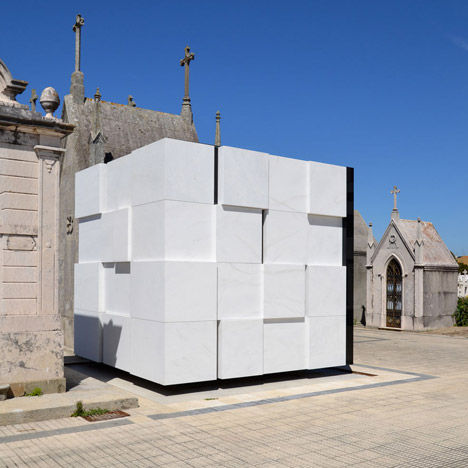 The Cubed Mausoleum is a Perfect Grid of White Marble Squares

Tiffany — February 28, 2014 — Art & Design
References: armazenarideias & dezeen
Share on Facebook Share on Twitter Share on LinkedIn Share on Pinterest
Local Portuguese architecture and design studio Armazenar Ideias has built a mausoleum built using cuboid pieces of cut marble. The cuboid-formed mausoleum is located in the Portuguese city of Póvoa de Varzim. The structure was inspired by a simplistic, yet clean look for the Venezuelan family.

Wanting to detach from building traditional mausoleums that replicate classical buildings seen in Portuguese home structures, head architect Pedro Matos wanted to do something different. He states on the site, “not so much the old solemnity and ‘baroque thinking’ associated to death, but a much more simple and essential way to interpret it, detached from the excess of symbolism.”

The mausoleum was designed with a sacred theme, Matos says that the facades were made from the whitest and cleanest marble he could find. In contrast with the bright white marble, the vault’s exterior uses a reflecting black glass, giving an element of privacy.