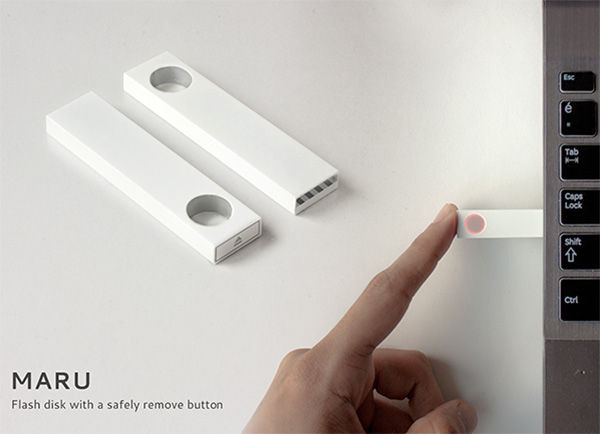 Amelia Roblin — March 29, 2014 — Tech
References: behance.net & yankodesign
Share on Facebook Share on Twitter Share on LinkedIn Share on Pinterest
The Maru Flash Drive integrates a feature that USB sticks generally do not have. On the end opposite that of the metal hookup, the electronic accessory has a button that's branded with the 'Eject' symbol, reminding you that the device must be safely removed using the proper procedure.

Many people aren't aware that this action must be taken, and even those who know that they're supposed to initiate the withdrawal with a computer command can often not figure out how to go about it. With Ahmet Burak Aktas's concept gadget, all that you have to do is press this button and pay attention to the illuminating feature. A hole in the ABS case lights up with green or red LEDs, indicating Transfer status and Connection status, respectively, and Safe to Remove status when the glow has gone away.
1.9
Score
Popularity
Activity
Freshness
View Innovation Webinars