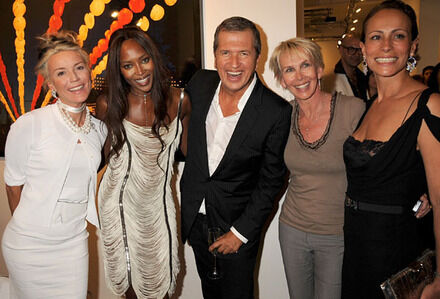 Mario Testino "Obsessed by You" Exhibit

Bianca — July 8, 2008 — Celebs
References: style
Share on Facebook Share on Twitter Share on LinkedIn Share on Pinterest
Mario Testino, the famed fashion and celebrity photographer, is having some of his best works displayed at an exhibition called "Obsessed by You." At the opening, celebrities and VIPS including Tom Ford, Claudia Schiffer, Naomi Campbell, Daphne Guinness and Trudy Styler showed up to 'ooh and ahh' at his photographic masterpieces, as can be seen in this video.

Mario Testino, who was born in Lima, Peru, got his big break after he photographed Princess Diana in her last shoot. He still photographs the Royal Family, but it's the work he's done since since Diana's death that brought his career into full bloom.

The gallery shows an image of the launch as well as 10 images by Testino including some from Mario's book, Let Me In, one featuring Angelina Jolie, Brad Pitt and their kids and the other featuring Demi Moore and Ashton Kutcher.

Take a look at some more work we've covered by Mario Testino: