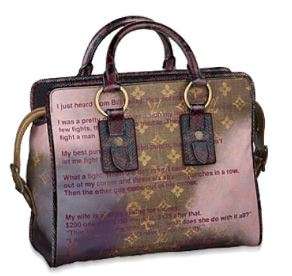 Bianca — March 27, 2008 — Fashion
References: louisvuitton & thebaglady
Share on Facebook Share on Twitter Share on LinkedIn Share on Pinterest
Until a recent shopping trip, I couldn't express how bored I was of Louis Vuitton. If people weren't toting the real thing, their shoulders were draped in fake LV bags carrying faux wallets, and if not, they'd be wearing knock-off scarves around their necks.

Thanks to Marc Jacobs, Louis Vuitton has come up with something more innovative, something different. Marc Jacobs simply doesn't do boring. When he designed the "Joke" bags, he ensured that while they still featured the classic LV monogram, they strayed from LV's traditional posh and proper style.

When I saw the refreshing design behind the glass case, I tried walking by, really I did.... but after doing a triple take, I simply had to go back to do an up close inspection.

Now I bring it to you, for scrutiny on your computer screen.

I've also included the St. Tropez square scarf which I'm in love with. If you're into matchy-matchy accessories, the Palette Square, also featured, might be more your thing.
3.6
Score
Popularity
Activity
Freshness
Get the 2021 Trend Report FREE