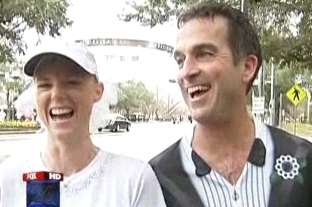 Jordan M — February 1, 2011 — Lifestyle
References: tonic & aolnews
The idea of marathon marriages might sound out of this world, but David Upton and Molly Johnston did just that during the Chevron Houston Marathon on January 29th, 2011.

Pausing midway through the race for a quick ceremony in front of family and friends, the two newly weds turned their love of each-other and running into a unique on-the-go wedding. In doing so, their nuptials served as one of the first marathon marriages ever recorded.

Implications - This unique (and patently ridiculous) idea can be attributed to Johnston's sister, "My sister had the crazy idea because we run so much," Molly said. "We just decided 'Why not?'"