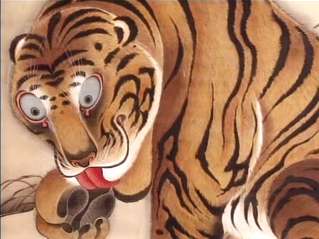 karl burkart — August 7, 2008 — Art & Design
References: lacma.org
Share on Facebook Share on Twitter Share on LinkedIn Share on Pinterest
The Edo period in Japan was, in a certain way, the beginning of "modern art" as we know it. The impressionists (who were the grand-dads of modern art in the west) looked to Japanese art for inspiration in their quest to liberate their brushes from the tyranny of realism.

A breathtaking new exhibit of one of the forgotten masters of the Edo period, Katsu Jagyoku, is touring the country thanks to an unlikely collector, Joe Price. Price met Frank Lloyd Wright as a boy, and Wright transmitted to him his passion for Japanese art, inspiring the boy to become one of the greatest collectors of these rare paintings.

The collection is amazing - a world of animals, birds, insects and flowers that pull you in to an abstracted dream-like garden. Jagyoku also invented a technique never repeated, in which a myriad of squares within squares of different colors create the optical illusion of movement as you walk past the painting. You can listen to Joe price and look at the paintings in the video created by LACMA.

If you can go see the exhibit! Also see my post on cute Japanese robots.