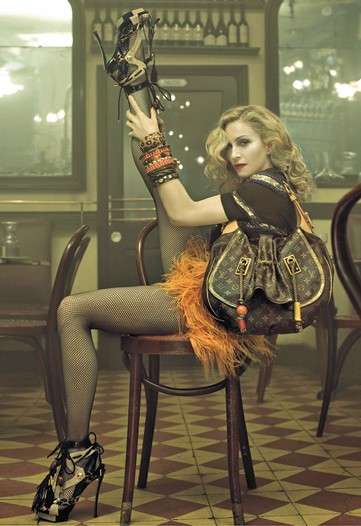 Ayman — December 4, 2008 — Celebs
References: picasaweb.google & wwd
Share on Facebook Share on Twitter Share on LinkedIn Share on Pinterest
We finally get to see the much-anticipated new Louis Vuitton ads featuring Madonna. Shot by famed photographer Steven Meisel, the campaign has a theme of a smoky French bistro that stays true to the Parisian vibe of the spring Vuitton collection designed by Marc Jacobs. A very flexible Madonna poses while sitting on a chair in the first two images that have surfaced so far. The new campaign consists of six images in total.

“It’s a big change from what we were doing. It tells a story,” explained Antoine Arnault, Vuitton’s director of communications. “This I think is an amazing coup, but more than that, there’s real logic behind it. It’s very linked to Marc’s fashion show.”

So how did Marc Jacobs, Vuitton’s creative director, come up with the idea of using Madonna for the campaign? He explains that he was inspired by attending her Paris show: “I was totally just blown away by it, and moved by her performance, by what she had to say, and her energy.”

While at a Monday morning meeting to brainstorm about the new ad campaign, the idea just came to him. “I just blurted out, ‘I think we should do Madonna!’” says Jacobs. He immediately sent a message to Madonna on his BlackBerry asking her to be the face of the new campaign. Within five minutes, he received the answer from the queen of pop: “I’d love to.”

UPDATE: Check out the other four ads in the campaign below.
3.8
Score
Popularity
Activity
Freshness
Access Advisory Services