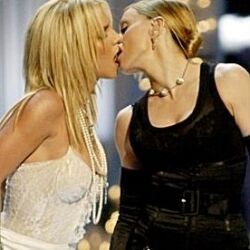 mediterranean — July 7, 2008 — Pop Culture
References: thesun
Share on Facebook Share on Twitter Share on LinkedIn Share on Pinterest
Could the Queen of Pop be the one to save its troubled Princess? Britney Spears reportedly collaborated with Madonna on a video this past Sunday that will be broadcast on huge screens in her majesty's upcoming Sticky & Sweet Tour. This adds to the buzz and hype of the already anticipated and sold out tour which kicks off on August 23.

In addition to the video cameo, there are reports that Britney might make live appearances and perform in a few of the tour's world dates.

"It's hoped that Madonna can help Britney get back to her old self. Appearing with Madonna would really kickstart her career again. She's been there and done it so could provide some great guidance," the Sun reported, "If anyone can mastermind a Britney comeback, it's Madonna."

Britney and Madonna collaborated before on the song, ''Me Against the Music.'' However, their most remembered collaboration was the infamous steamy kiss at the MTV Music Awards in 2003. That kiss has been considered by many as the 'kiss of death' that ended Britney's career. Maybe Madonna is trying to make up for that.

Most importantly, will we see a repeat of the infamous kiss? Judging by the fact that Madonna snogged a female dancer on stage two months ago (see gallery below), we just might!
3.9
Score
Popularity
Activity
Freshness
Get Better and Faster