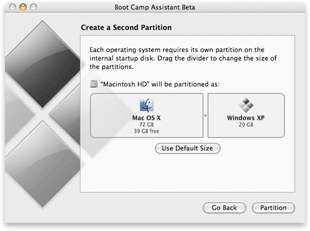 From Mac.com:
More and more people are buying and loving Macs. To make this choice simply irresistible, Apple will include technology in the next major release of Mac OS X, Leopard, that lets you install and run the Windows XP operating system on your Mac. Called Boot Camp (for now), you can download a public beta today.

As elegant as it gets
Boot Camp lets you install Windows XP without moving your Mac data, though you will need to bring your own copy to the table, as Apple Computer does not sell or support Microsoft Windows.(1) Boot Camp will burn a CD of all the required drivers for Windows so you don't have to scrounge around the Internet looking for them.

Run XP natively
Once you've completed Boot Camp, simply hold down the option key at startup to choose between Mac OS X and Windows. (That's the â€œaltâ€ key for you longtime Windows users.) After starting up, your Mac runs Windows completely natively. Simply restart to come back to Mac.