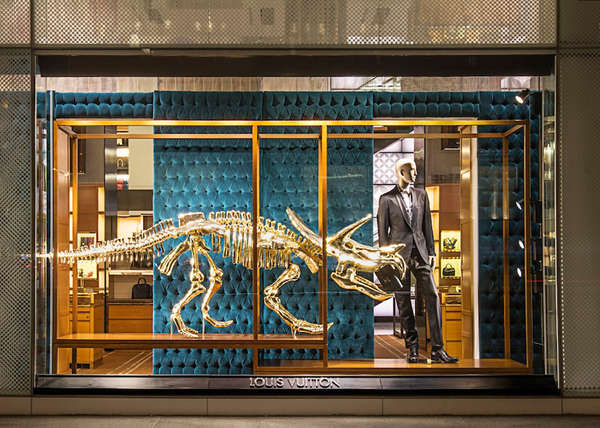 Gold Dinosaurs are Used in the Louis Vuitton Displa

Ian Andrew Panganiban — June 26, 2013 — Fashion
References: juxtapoz
Most of the Louis Vuitton displays showcased in stores house a sense of wonder to them that’s not common in most fashion window displays.

The New York 5th Avenue Maison storefront for Louis Vuitton features several golden dinosaurs as part of its window display. The mannequins are attired with the fashion label’s pre-fall 2013 collection, but street gawkers will undoubtedly notice the golden dinosaurs first before they notice the advertised fashion collection.

The inspiration for the Louis Vuitton displays came from the Natural History Museum from Paris’s Les Jardins Des Plantes. The window display features a tyrannosaurus rex, a stegosaurus, a triceratops, a velociraptor, a spinosaurus and a dimetrodon, all of which are dosed in glistening gold.