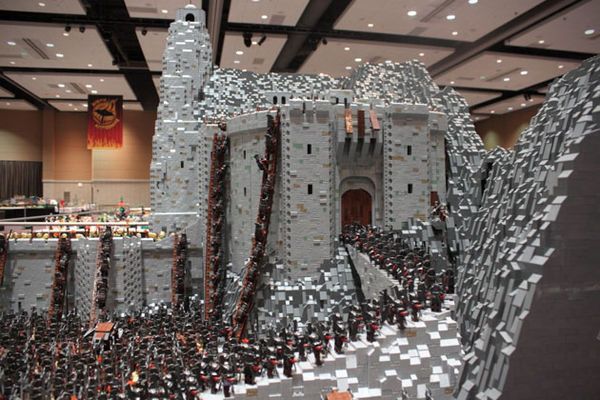 This Lord of the Rings Custom LEGO Set Uses Over 150,000 Pieces

Thomas Wade-West — November 3, 2013 — Art & Design
References: hiconsumption
Share on Facebook Share on Twitter Share on LinkedIn Share on Pinterest
The Lord of the Rings ‘The Battle of Helm’s Deep’ is an official LEGO set, which consists of 1,368 pieces. The customized version by LOTR fanatics Rich-K and Big J takes this standard set to the next level with their custom 150,000 LEGO piece set.

The actual scene depicted is from J.R.R. Tolkien’s LOTR (The Battle of Helm’s Deep), a battle where Uruk-hai, Rohirrim, Elves and others battled in a huge massacre. This is one of the most epic scenes of the film. Rich-K and Big J decided that the standard boxed LEGO set is not quite detailed enough to do this scene justice; consequently the two fans used bricks, 1,700 mini figurines and other pieces to reconstruct this scene.

All this construction takes is one person to lose their footing and it will come tumbling down. An epic smashing of this piece would be worthy of viral status on YouTube. take a look at more of their photos on their Flickr account.