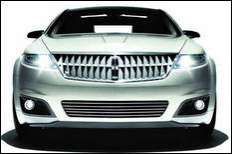 Arjun Davda — January 14, 2006 — Autos
References: news.agendainc & freep
Share on Facebook Share on Twitter Share on LinkedIn Share on Pinterest
Beginning today at the Detroit auto show, Ford Motor Co. will kick off a plan to rescue its struggling 89-year-old Lincoln brand. It starts with two concept vehicles and a new strategy to name its models with letter combinations, as many competing luxury makers already do.
"It'll be a transition over time," Ford's new President of the Americas, Mark Fields, said in an exclusive interview with the Free Press Sunday to discuss the future of Lincoln.

"I want people to focus on the Lincoln brand," Fields said. The effort will be kicked off today when the company unveils two concept vehicles: an MKX crossover, which will replace the Aviator SUV, and an MKS sedan. (DETROIT FREE PRESS)