Career Revivals Through Dance
Next
Set of
Related
Ideas 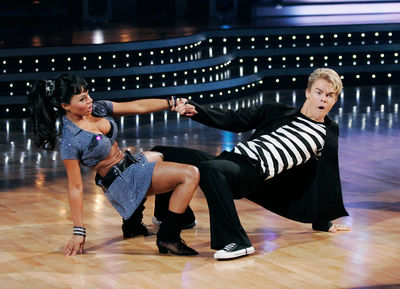 Lil Kim's Wardrobe Malfunction on Dancing With The Stars

If it weren’t for a fast acting host, Lil Kim’s fashion blunder would have been a wardrobe malfunction not to be forgotten—especially since the series attracts many older viewers!

The incident “forced host Tom Bergeron to stand between her and the judges as she adjusted her top while judge Len Goodman critiqued her performance,” Reuters dishes. “It was quick, which has led to speculation about how much the rapper, who is known for sexually explicit lyrics, might have actually shown to viewers of the ABC program?”

Fortunately thanks to editing, West Coasters were spared all the, uh, details.

When her Dancing With the Stars partner Derek Hough joked to US Weekly Lil Kim pulling a Janet Jackson, the rapper piped up, “Don’t say that! That’s a whole other show! I’d have to get paid a lot, a lot of money!”

The Lil Kim wardrobe malfunction didn’t hurt her ratings though; she and Hough scored two perfect 10s and an 8!

The performance was incredible, however, and their jive was not to miss!
4.6
Score
Popularity
Activity
Freshness
View Innovation Webinars

Ballroom Dancing Kids
8 Year Olds on Dancing With the Stars