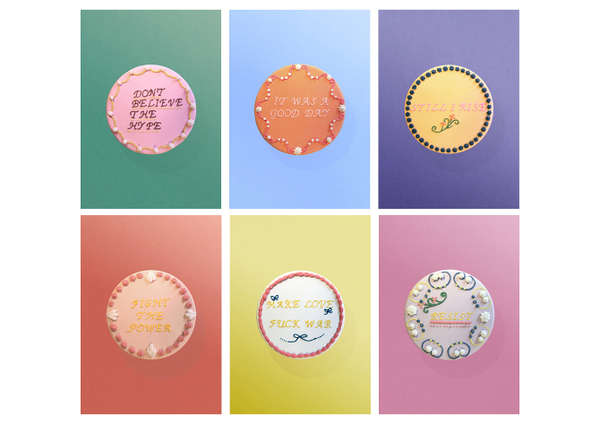 Meghan Young — May 31, 2013 — Lifestyle
References: beccymccray & itsnicethat
Share on Facebook Share on Twitter Share on LinkedIn Share on Pinterest
The Like Fat Kid Love Cake series revolves around the art of a well-phrased cake. But instead of well-wishes written in sweet icing, it boasts names of some of the most significant hip-hop tracks of the 1980s and '90s. Labelled as 'baketivism posters,' by the artist, the series combines two of her favorite things.

Baked and iced by London-based Beccy McCray, the Like Fat Kid Love Cake series was named after Fifty Cents line, "I love you like fat kid love cake." Arguing that "hip-hop has been one of the biggest radicalisation tools of all-time," she further states that "eating is one of the rap's most pervasive obsessions. Sometimes, food is used as a cultural signifier to describe the rags-to-riches journey, which might start with Tesco value donuts but end with Michel Roux Jr gateaux." Hence the connection.
4.2
Score
Popularity
Activity
Freshness
Attend Future Festival