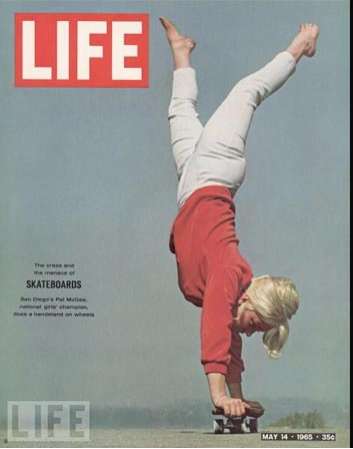 The Life Magazine 60s Skateboarding Captures are a Time Capsule

Jordan Sowunmi — July 14, 2011 — Lifestyle
References: life & lifelounge.au
Share on Facebook Share on Twitter Share on LinkedIn Share on Pinterest
In the last 20 years, skateboarding has established itself as one of the most popular youth sports in the world, but the Life Magazine 60s skateboarding captures illustrate that the recent dominance of skateboarding cannot be viewed as an overnight success.

The Life Magazine 60s skateboarding shots were taken at the height of the skate invasion in California and features people of all ages enjoying longboards and trying a variety of tricks, including lying down on the board (known as "The Coffin") and wheelies.

One of the most jarring things about the photographs is just how many people are skating without any shoes. Skate shoes are infamous for bearing rips from the wear and tear of failed tricks and extended periods of time spent on a skateboard.

The Life FMagazine 60s skateboarding photos are a portal into the nascent days of one of contemporary pop culture's biggest subcultures.

Implications - In the last few years, contemporary pop culture has shown an obsession for styles and tropes of the past. One of the best ways a company can capitalize on this newfound consumer desire for vintage items would be to show the company's history, including the first version of modern products they are selling. Not only will this show the consumer how far the company has come, it will help them appreciate the technological and stylistic developments the company has made.
4
Score
Popularity
Activity
Freshness
Get the 2021 Trend Report FREE