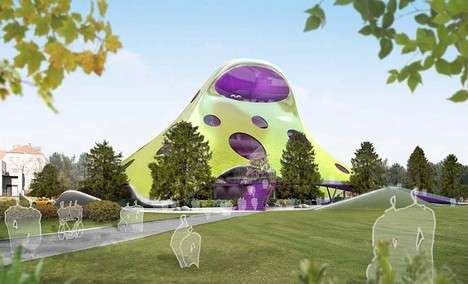 Libraries With Stunning Architecture Around the World

Tinkalicious — December 15, 2008 — Art & Design
References: trendhunter
Share on Facebook Share on Twitter Share on LinkedIn Share on Pinterest
Although it would seem that everything we read these days is on the computer screen, the need for libraries continues across the world. As a place for containing all kinds of information, there is nothing more fantastic than visiting a large city library. The architectural gems featured here are far from the pedestrian, typically government or endowment sanctioned grey boxes, commonly found in many towns and on university campuses.

For example, The National Library of the Czech Republic will be constructed using white marble and mirror-finished stainless steel, with a capacity for 10 million volumes. Maybe it’s because of its unique demographic, but Seattle is home to more than one architecturally superior library. The Seattle Public Library is a modern and contemporary, glass, steel and concrete marvel. In addition, Seattle is the home of the Ballard Library, which encompasses the green motif with its grassy roof.

The Consortium Library, located at the University of Alaska Anchorage, interestingly utilized its “washtub” design to keep heat off students; that’s correct, even in chilly Alaska, heat can be problematic, especially for books, and the people reading them.

China, in its every increasing awareness of keeping the population well informed and educated, has several proposed projects pictured in the concept stages, some of which await construction.

The curved glass wall makes for a light and bright destination library for Philadelphia’s Parkway Central Library. In England, the Peckham Library houses the children’s library in a wooden elevated tripod “Pod”.

Any library article would be remiss if it didn’t include a presidential library, and the John F Kennedy Presidential Library and Museum in Boston, is as great an example as any. The Procter Library in New Zealand is known as “the knowledge basket of Kerikeri” in the Maori language, which is a great way of describing what a library really is: a great big basket of knowledge.
2
Score
Popularity
Activity
Freshness
View Innovation Webinars

Bookmobiles Of A Different Breed
Animals As Mobile Libraries