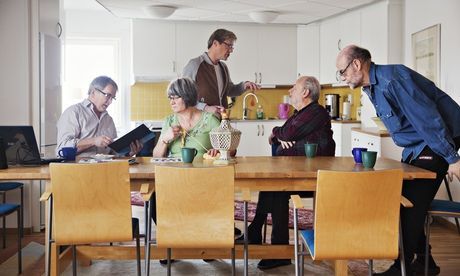 Sweden's Regnbagen House is a First for Europe

Meghan Young — October 10, 2014 — Life-Stages
References: dailymaverick.co.za & theguardian
Share on Facebook Share on Twitter Share on LinkedIn Share on Pinterest
Although there have been huge strides for the gay community over the years, LGBT retirement homes are far and few in between. The Regnbagen House is the first of its kind in all of Europe, but will soon be joined by a similar enterprise in Spain. Located in Stockholm, Sweden, a country celebrated for its liberal ways, it caters to a community that is still experiencing discrimination in boomer culture.

With LGBT retirement homes already starting to open up in other parts of the world including Canada, Australia and the United States, it is only natural that one would sprout on European soil. Christer Fällman, 55, the chairman and youngest resident of Regnbagen House, says, "People want security in old age. They want closeness to other people, and not to be so lonely."
4.9
Score
Popularity
Activity
Freshness
Get the 2021 Trend Report FREE