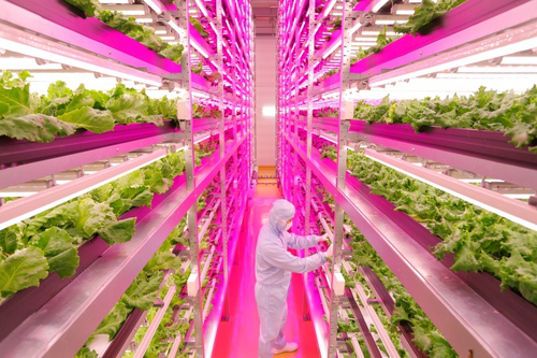 Alyson Wyers — July 17, 2014 — Tech
References: miraigroup.jp & coolbusinessideas
Share on Facebook Share on Twitter Share on LinkedIn Share on Pinterest
The world's largest indoor lettuce farm was once a Sony Corporation semiconductor factory. Located in the Miyagi Prefecture of eastern Japan, this operation is the brain child of plant physiologist Shigeharu Shimamura. Mirai Co. is a water, space and energy efficient interior farming system resulting from a partnership with GE Japan.

Despite only having started production one year ago, the lettuce farm production now ships out 10,000 heads of lettuce on a daily basis. The 25,000 square foot operation is almost half the size of a football field, with 17,500 LED bulbs lighting the way. With 18 cultivation racks reaching 15 levels high, it becomes easier to see how they could produce so much product. The LED lighting is key, having been developed by GE to emit light considered optimal for plant growth.
5.9
Score
Popularity
Activity
Freshness
View Innovation Webinars