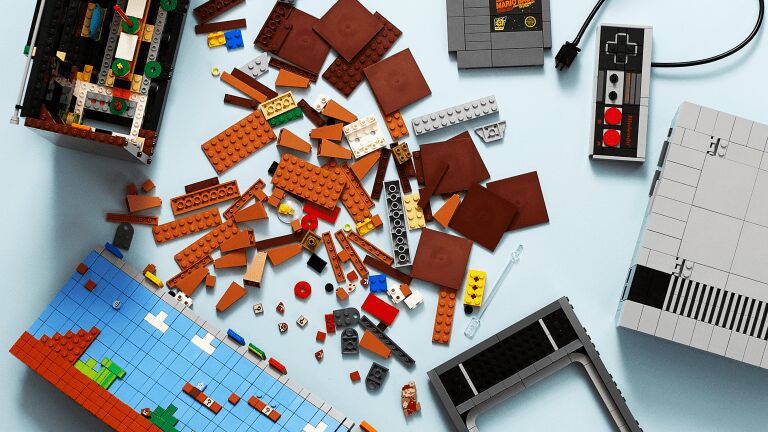 The LEGO and Nintendo Collaboration Collection is Inspired by the 80s

Rick Ortiz — February 4, 2021 — Tech
References: romsplanet & lego
Share on Facebook Share on Twitter Share on LinkedIn Share on Pinterest
LEGO and Nintendo have teamed up on a new adult toy brick set, the Nintendo Entertainment System™ (NES). The set allows builders to assemble a game console with all its characteristic details. In addition to the set-top box, the set also includes a TV model from the 80s.

Additionally, the NES set will consist of a joystick, an opening slot for a game cartridge, and a cable with a plug. The set will also include a vintage TV with an 8-bit figurine of Mario on the screen and an activating cube. After scanning the last, the LEGO Mario figure from the LEGO SuperMario Starter Set will react to the characters and obstacles that will be visible on the screen.

The set contains a LEGO Mario figure showcasing a range of emotions and reacting to movements, colors, and activation bricks. This is the core of the game, which can then be expanded with additional sets, power-up sets and collectible character sets. All of them were designed not only to recreate the LEGO Super Mario world in reality but also to unleash players' inner creativity as they rebuild the game levels.

This Lego and Nintendo NES collectible will be available exclusively in LEGO Certified Stores starting August 1st, 2021. The LEGO Super Mario line of sets will also go on sale on August 1st and will be available directly from certified LEGO stores as well as leading retailers.