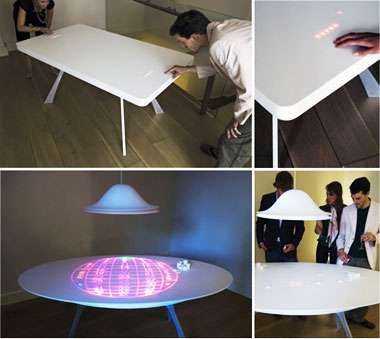 TechnoGadget — November 25, 2006 — Tech
References: designboom
Share on Facebook Share on Twitter Share on LinkedIn Share on Pinterest
Moritz Waldemeyer created several LED gaming tables. He set in LED lights and touchpads into plain white tables to produce interactive games. The Roulette table illustrates a lighting map, while the white table converts itself into a ping pong machine. The tables were displayed at the Rabih Hage Gallery in London.

â€œpong table - the pure white table made of the corian® can, at the flick of a switch, transform itself into the competitive field of ping pong, allowing you to play Pong at your table. inspired by the first generation computer designers that started the IT revolution in their bedrooms, 'pong table' plays homage to those early video games.â€

â€œroulette table - the luminous electric dining table (LED) combines the elegance and translucency of corian® with the international sophistication. roulette game plan is incorporated into the table by means of an illuminated map. the lamp above the table reveals an inverted roulette wheel, the rolling ball of which is represented by moving lights circumnavigating the outer edge.â€