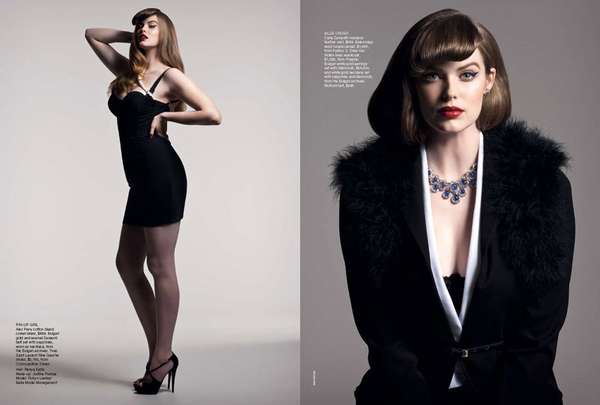 Marie C. Hudson — August 2, 2011 — Fashion
References: vogue.au & fashiongonerogue
Share on Facebook Share on Twitter Share on LinkedIn Share on Pinterest
Images of classic pin-up beauty are revisited in the Robyn Lawley Vogue Australia September 2011 spread by photographer Max Doyle, titled 'Belle Curve.' The 10 page editorial is the first time a plus-size model has been featured in Vogue Australia, but will certainly not be the last. Editor Kirstie Clements notes in her September editor's letter, “This is the first time Vogue Australia has shot a larger model and, of course, now that we have done it, I ask myself why we didn’t do it sooner."

Lawley is a perfect pin-up superstar in the photos, sporting a fringe that would make Bettie Page herself jealous. Her 50s-inspired locks, paired with bright-red lipstick and thigh-high stockings, create a look that is reminiscent of the cartoon character Jessica Rabbit, known for her sassy and seductive poses.

The Robyn Lawley Vogue Australia September 2011 shoot shows that curves are definitely 'in' -- if they had ever left at all.
2.9
Score
Popularity
Activity
Freshness
View Innovation Webinars