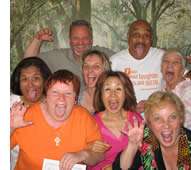 Rose A. Valenta — January 18, 2008 — Lifestyle
References: laughangeles & laughangeles
Share on Facebook Share on Twitter Share on LinkedIn Share on Pinterest
More than a year ago, Trend Hunter covered Laughter Yoga. Since then, Laughter Yoga has been sweeping the globe. The first ever Laughter Yoga training in Eastern Europe took place on January 5th and 6th in Moscow, Russia. It was taught by Sebastien Gendry, Director of the American School of Laughter Yoga. This training was historic in that it strengthened the seed of possibility for social Laughter Clubs in Russia, a country with over 140 million people. The video clip below shows this historic event.

The American School of Laughter Yoga claims that â€œthe use of laughter is a genuine solution to stress and health related issues.â€

It reminds me of a stressful event that took place when we were transporting a friend's Myna Bird to Florida. The bird only knew how to cuss. When a trooper pulled us over and approached the car with the usual â€œMA'M! Do you know why I pulled you over?â€ The bird screeched â€œYou're a &^%$ idiot.â€ The trooper had a stunned look on his face and everyone in the car laughed. Stress relief and no ticket was issued.