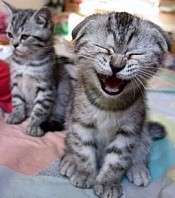 Bianca — February 23, 2008 — Unique
References: pinktentacle
Share on Facebook Share on Twitter Share on LinkedIn Share on Pinterest
You've heard laughter is good for soul, it's the best medicine, and you've also heard it's been proven to kill diseases, even able to fight off serious illnesses like cancer. A few Japanese researchers wanted to find a way to measure the strength of a laugh, so they invented a machine that does just that. It uses a unit of measurement called aH and is capable of detecting whether a laugh is real or fake.

The Kansai University invention will help scientists study the physiological impact a good chuckle can have by using electrode sensors to measure the bioelectricity made by the facial, chest and abdominal muscles used when laughing.

The aH level is then determined by taking 3,000 measurements per second of laughter. A one second, genuine, deep belly laugh is 5 aH. The diaphragm doesn't vibrate during a fake laugh, which could amount to a measure of 0 aH.

The researchers hope it will be used for both health and entertainment purposes.
2.5
Score
Popularity
Activity
Freshness
Get Better and Faster