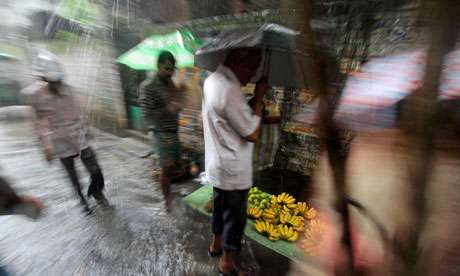 Control When and Where Precipitation Occurs with Laser-Assisted Rainfall

Omar Yusuf — September 18, 2011 — Eco
References: guardian & io9
Laser-assisted rainfall, however baffling an idea, is as simple as its name implies. We shoot lasers into the sky and, voila, rain begins to precipitate.

After the havoc and general malcontent sowed by Hurricane Irene, you might ask, "Who would want to have more rain?" Well, after suffering the worst drought in recorded history, the Texans might -- as would dozens of other equatorial, water-starved nations. By creating nitric acid particles in the air, water molecules begin to bind together until they reach the size of raindrops, at which point their mass forces them back to the earth. But laser-assisted rainfall isn't just about generating clouds: it can also prevent downpour. The often-destructive autumn monsoon season could be mitigated by this process, preventing flooding and reducing property damage.