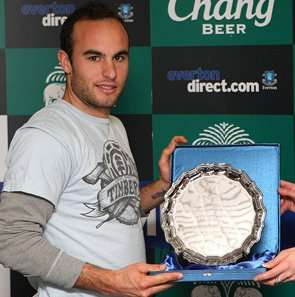 Landon Donovan Fans Plead for Him to Stay at Everton

Brian G Randles — February 25, 2010 — Lifestyle
References: facebook & soccernet.espn.go
Share on Facebook Share on Twitter Share on LinkedIn Share on Pinterest
Landon Donovan is the face of U.S. soccer, but it seems as if the football fanatics of Everton want to keep him in England a little while longer. Ironically resembling the predicament L.A. Galaxy teammate David Beckham was put in when he was on loan at A.C. Milan, the situation for Landon Donovan is more of a heart-warming gesture from true soccer fans in England than an

Facebook groups have been popping up everywhere from Team Coco to the Nickleback Fighting Pickle, but this one is not so much absurd as it is a testament to the fans of Landon Donovan and Everton.