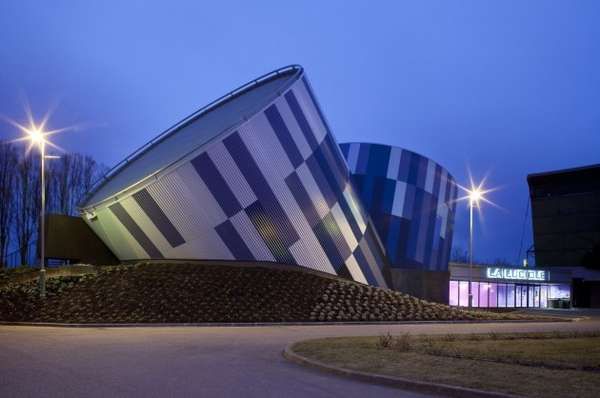 Meghan Young — June 4, 2013 — Art & Design
References: moussafir.fr & contemporist
Share on Facebook Share on Twitter Share on LinkedIn Share on Pinterest
The La Luciole Concert Hall is a great example of playful architecture. Shaped into two tilting cylinders, it creates a friendly and intimate atmosphere for guests. Interestingly, the intersecting forms create an elliptical arc between the audience and the stage for a dramatic sight that would heighten any performance.

Designed by Moussafir Architectes Associés, the La Luciole Concert Hall is located in Alençon, France. The auditorium is able to accommodate 650 people. A landmark for the town's Western sector, the circular roofs embrace the venue's ellipse-shaped logo. According to the designers, "The new concert facility is above all a non-referential design, a minimalist object emerging from the ground, a geyser linking earth and sky." By night, is lights up with projected images.
3.1
Score
Popularity
Activity
Freshness
View Innovation Webinars