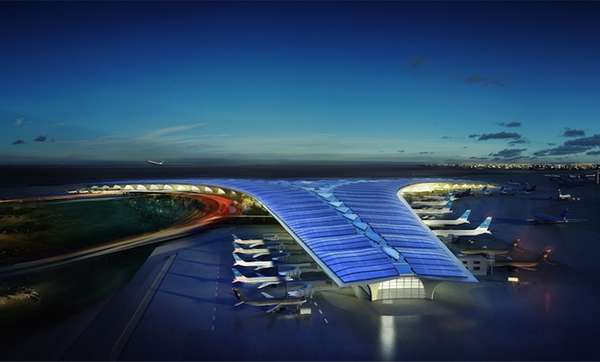 The New Kuwait International Airport Flies into the Future

Corinne Guirgis — October 11, 2011 — World
References: fosterandpartners & mymodernmet
Share on Facebook Share on Twitter Share on LinkedIn Share on Pinterest
Take flight into the future with the new design of the Kuwait International Airport with design plans that look straight out of the year 3000. Designed by London-based firm Foster + Partners, who are recognized and celebrated for their physics-defying, futuristics conceptions all over the world, this airport is almost as exciting as the idea of boarding a plane for a quick vacation.

The airport will supposedly see up to 13 million annual travelers with a capacity for up to 50 million if needed. Numbers like this are virtually unheard of in travel and transportation. The design allows a marriage between the indoor and outdoor worlds, providing relief from one of the world's hottest climates while incorporating openings in the roof to allow for natural sunlight.

This airport will revolutionize the tourism industry in Kuwait and have significant global implications, as it aspired to be the first passenger airport to achieve environmental accreditation due to "the concrete structure acting as a thermal mass and the solar panels found on the roof," says My Modern Met.

Kuwait's traditional Dhow sailboats serve as the inspiration for the airport's design and, as Mouzhan Majidi, the chief executive of Foster + Partners says, will hopefully be "a new symbol of contemporary Kuwait, which resonates with its rich culture and history.”
2.2
Score
Popularity
Activity
Freshness
Get the 2021 Trend Report FREE

Airport Electroscooters
The Nexus is Specially Designed for Airports