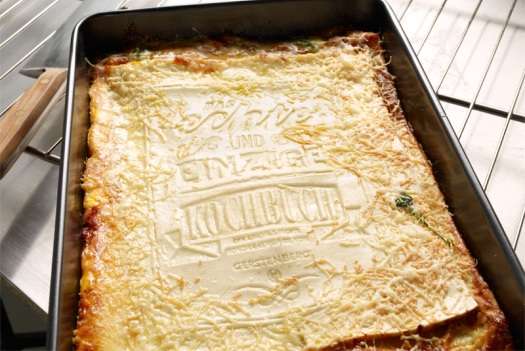 'The Real Cookbook' by Korefe Provides Some Tasty Instructions

Andrew Robertson — March 26, 2012 — Unique
References: korefe.de & psfk
Now thanks to 'The Real Cookbook' by Korefe, procrastinating would-be chefs no longer have an excuse to not get cooking. This edible cookbook by the German design agency has instructions written on pasta which are used to create the lasagna itself. The instructions guide you step-by-step and have you include those guides within the recipe.

The only downfall of Korefe's new cookbook is that you will have to jot down the soon to be eaten instructions on a separate piece of paper, a small price to pay for a delicious meal. Reminiscent of Kramer's 'Coffee Table Cook' from Seinfeld, 'The Real Cookbook' provides you not only with a guide to prepare a meal, but with the ingredients to the meal itself. Korefe's ingenious adaptation is simultaneously an introductory guide to cooking as well as a potential great first meal for rookies of the culinary art.