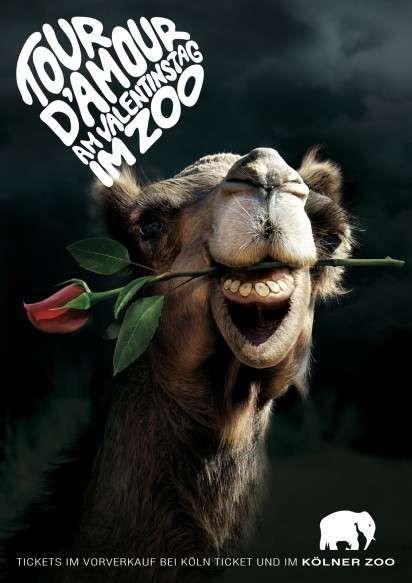 Meghan Young — January 16, 2012 — Marketing
References: preussundpreuss & ibelieveinadv
Share on Facebook Share on Twitter Share on LinkedIn Share on Pinterest
It is easy to fall into the same boring Valentine's Day routine of dinner and a movie, but the Kolner Zoo Tour D’Amour campaign offers a more exciting and adorable alternative. For those in the Cologne, Germany, area this February, the local zoo has a special tour set up for lovebirds. By the looks of this ad campaign, however, lovers might have to be wary that their partners aren't snatched up by another.

The Kolner Zoo Tour D’Amour campaign was conceived by Preuss Und Preuss, an ad agency based in Berlin. It centers around three exotic animals (a camel, gorilla and owl) who have been struck by Cupid's arrow. Simple and endearing, these ads will definitely draw a crowd.
2.8
Score
Popularity
Activity
Freshness
Get Trend Hunter Dashboard