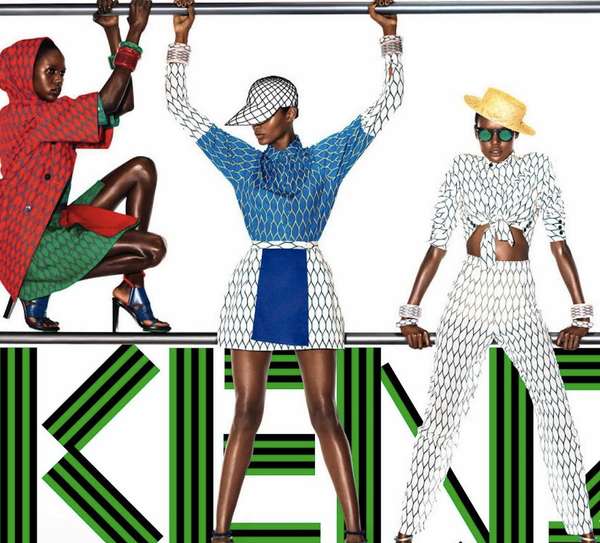 The Kenzo Spring/Summer 2012 Advertisements are Eclectic

Jordy E — May 18, 2012 — Marketing
References: kenzo & mode.newslicious.net
Share on Facebook Share on Twitter Share on LinkedIn Share on Pinterest
The Kenzo Spring/Summer 2012 advertisements get down to the point in an immediate sense. Behind models Alek Wek, Ajak Deng, and Nairoby Matos is a large lime green Kenzo sign, in plain view for consumers to see. The women are found stretched out among two metallic poles, and while they are in front of the banner, the bold lettering is still readily legible.

Supermodels Wek, Deng and Matos are all clad in mismatched ensembles here. An eclectic assortment of patterns is displayed, pairing red overcoats with dark-blue pumps. Photographer Mario Sorrenti captured the unusual editorial, emphasizing the dazzling array of colors as they contrast with a pure white backdrop.

The Kenzo brand has been consistently recognized for its lavish appeal and propensity for fashionable drama: two qualities that are yet again apparent here.
3.3
Score
Popularity
Activity
Freshness
View Innovation Webinars