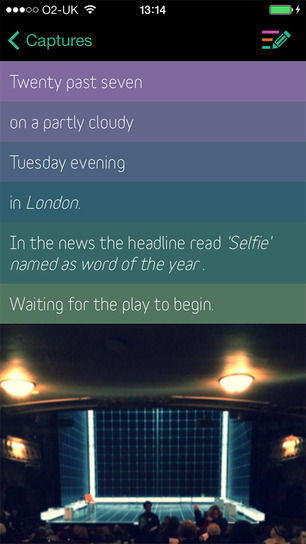 Meghan Young — September 16, 2014 — Tech
References: kennedyapp & coolhunting
Share on Facebook Share on Twitter Share on LinkedIn Share on Pinterest
Inspired by the tragic Kennedy shooting, which is often remembered through the historical question, 'Where were you when Kennedy was shot?,' the Kennedy App helps people document significant moments in their life. A practice that often fades as the year progresses, the Kennedy App ensures that people stay up on recording events that they wish to remember for years to come.

Created by Brendan Dawes, a designer based in the United Kingdom, the Kennedy App is minimalist and engaging, which makes it even easier to use. Capturing a moment is as simple as tapping a circle titled 'Now,' which automatically records the time, local weather, date, location, current news headlines and music playing on one's phone. The Kennedy App finishes the entry off by adding or taking a photo along with a note.
1.7
Score
Popularity
Activity
Freshness
Jeremy Gutsche Keynote Speaker

Dramatized Storytelling Apps
Use the SKIT! App to Tell Your Friends and Family Your Stories