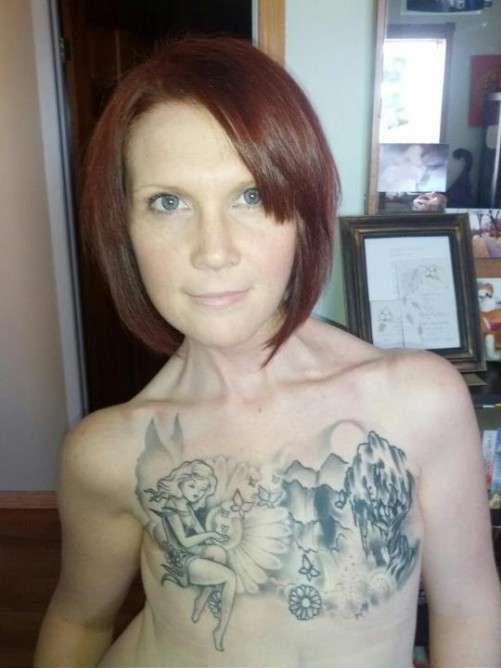 Brandon Bastaldo — April 9, 2013 — Social Good
References: 1310news & thestar
Share on Facebook Share on Twitter Share on LinkedIn Share on Pinterest
Kelly Davidson is making headlines around the world, but you'd be surprised to hear that it's not because this 34-year-old woman has battled and survived cancer for nearly her entire life. Instead, it's Davidson's magnificent fairy tale artwork inked directly on her chest and over the scars of her double mastectomies that has made her fight against this ailing disease a viral sensation showcasing the positive and negative aspects of social networking sites like Facebook.

Besides having fought against cancer since age 11, Kelly Davidson's story is captivating because instead of choosing to use reconstructive surgery after her mastectomies, Davidson decided to get tatted with a wonderfully detailed fantasy picture she felt symbolized her struggle against this disease.

Davidson posted a picture of her chest artwork to Facebook that was shared more than 500 thousand times and received more than 90,000 'likes.' Although Facebook never contacted Davidson, it removed her breast cancer activism tattoo art photos in the past, prompting many to question the world's most popular social network's policy and regard for humanitarian efforts.
6.7
Score
Popularity
Activity
Freshness
Get the 2023 Trend Report FREE