Tux Ties Without Shirts... For Ladies 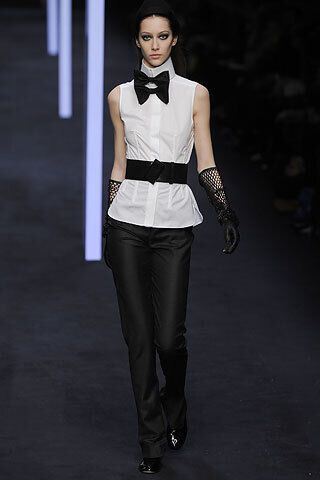 Bianca — March 1, 2008 — Fashion
References: style
Share on Facebook Share on Twitter Share on LinkedIn Share on Pinterest
When he's not designing for Chanel or Fendi, Karl Lagerfeld works on pieces for his own label. Without the pressure of having to conform to another brand's standards, the German designer gets really creative. His tuxedo collars and bow ties for women are a good example.

He showed the quirky look at Paris Fashion Week, an accessory you'd more likely expect to see on a Chip'n'Dale stud than on a willowy female model. Another model fortunately wore a white blouse underneath, yet she wore two bow ties, right on top of each other.

Karl's show wasn't entirely unwearable; some pieces were truly covetable; yes, even the bow ties when they were paired with long, tailored, button-down blazers.

Other looks reflected the designer's own iconic style: a lot of black accessorized with big, dark sunglasses like those he's rarely seen without.