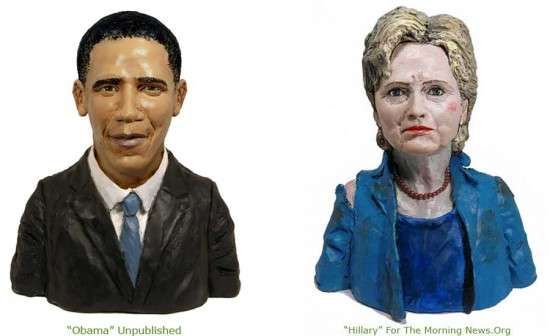 Corinne Guirgis — July 26, 2011 — Pop Culture
References: karencaldicott & odditycentral
Share on Facebook Share on Twitter Share on LinkedIn Share on Pinterest
Wax museums may be a thing of the past with the plasticine figures of artist Karen Caldicott, which pay tribute to iconic celebrities in a way that is both humorous and accurate. The subjects of her plasticine portraits range from political to film icons, such as Barack Obama, Bill Clinton, Jack Black and Barbara Streisand and even Apple CEO Steve Jobs.

Her immense skill has scored her collaborations with established publications that famously humor celebrity figures, such as the New York Post or Fortune Magazine. According to Oddity Central, "she bases her three-dimensional, seven-inch plasticine busts on photographs of the celebrities taken from different angles, and then shapes and carves away the clay until it looks like she intended."

Implications - Art has the incredible ability to immortalize iconic figures whose lives have inspired much celebration amongst the consuming public. Consumers are eager to possess artworks which commemorate these icons beyond the span of their mortal lives as both collectables and memories.
2.4
Score
Popularity
Activity
Freshness
Access Advisory Services