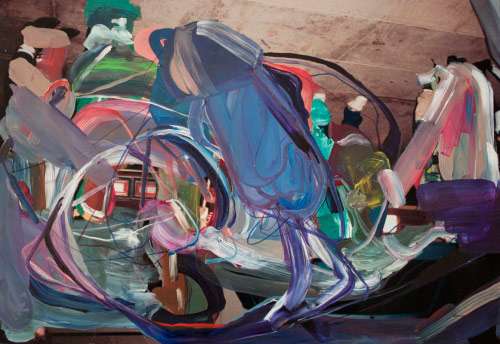 Jason Soy — May 1, 2012 — Art & Design
References: joshuadildine.wordpress & booooooom
Often times, artists fear smudging their art near the final stages of production, but in the case of Joshua Dildine, it seems it’s a welcomed part of the process. His idiosyncratic mixed media pieces all feature large slabs of paint smeared on top of an image in a controlled, yet seemingly random manner. The results are nonsensical when approached logically, yet there’s undeniable visual appeal when looking at his work.

Also notable of these Joshua Dildine pieces is its color combinations. The chromatic selections of paint Dildine decides to slap onto his compositions always compliment the photographs he uses as his canvases. And since the paint he coats each image in is thick and not entirely mixed, it creates a marble effect, giving his renderings even that much more appeal.